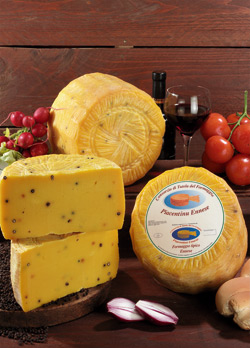 The PIACENTINU ENNESE P.D.O. is exclusively produced in the Enna Province. Its name takes origins from the dialect word “piacenti” that means” cheese that is liked”.The Piacentinu Ennese P.D.O. is a renowned Pecorino cheese to which saffron has been added.
There are many stories surrounding its origins.
One legend has it that Ruggero il Normanno, around 1090, worried about his wife Adelasia who had plunged into a deep depression, asked the cheese makers of the town to prepare a cheese which had miraculous properties. From this the idea was supposedly born of adding a handful of “crocus sativus” (saffron) to the sheep’s milk, a spice noted in antiquity for its anti-depressant and energising properties.
Apart from the legend, the Piacentinu is rich in historical references dating as far back as the 4th century when the historian Gallo mentioned the addition of saffron to cheese in a publication.
Careful consideration of the name “piacentinu ennese” P.D.O. would lead us to fund its origins back in a period even before the year 859: the year in which the Arabs took over the city changing the name “Henna” in “Castrum Hennae” (Castrogiovanni). Consequently, the fanciful shepherd who one day coloured the cheese curd with a handful of saffron, could have been a Sicanian, a Sicilian, a Greek or even a Roman who lived on Henna, one of the most ancient of the so-called “Wool Mountains”.The PIACENTINU ENNESE P.D.O. is a typical cheese produced with whole pasteurized sheep’s milk, coming only from native sheeps. It is a unique product as it is flavoured by saffron that gives it the typical yellow colour and then filled with black peppercorn. After an ageing process of 60 days, its taste is very characteristic, spicy and lightly mild, with stimulating properties. 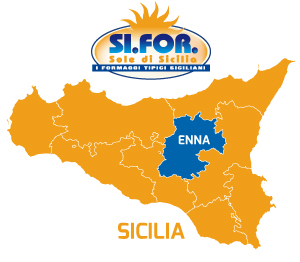